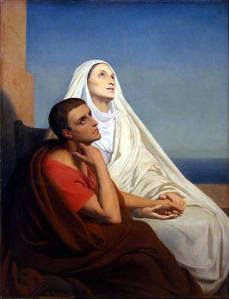 Saint Monica was the mother of St. Augustine of Hippo. She is honoured in the Roman Catholic Church where she is remembered and venerated for her outstanding Christian virtues, particularly the suffering against the adultery of her husband, and a prayerful life dedicated to the reformation of her son, who wrote extensively of her pious acts and life with her in his Confessions. Popular Christian legends recall Saint Monica to have wept every night for her son Augustine.

Monica was born a Christian at Thagaste, North Africa, around the year 331, the daughter of devout parents who educated her in the faith. Augustine gives only one incident from her youth, obviously relayed to him by Monica herself, of how she was in danger of becoming a wine bibber, but was corrected when her secret sips in the wine cellar were discovered and a maid, in a moment of anger, called her a “drunkard.” This stinging rebuke prompted her to change her behavior and develop perseverence. Perhaps this is why recovering alcoholics are among the many groups who intercede to Saint Monica.

Prayer for the Intercession of Saint Monica
Dear St. Monica,
Troubled wife and mother, many sorrows pierced your heart during your lifetime. Yet, you never despaired or lost faith. With confidence, persistence, and profound faith, you prayed daily for the conversion of your beloved husband, Patricius, and your beloved son, Augustine; your prayers were answered. Grant me that same fortitude, patience,and trust in the Lord. Intercede for me, dear St. Monica, that God may favorably hear my plea for (Mention your intention here.) and grant me the grace to accept His Will in all things, through Jesus Christ, our Lord, in the unity of the Holy Spirit, one God, forever and ever. Amen.

She was married early in life to Patritius, who held an official position in Tagaste, He was a pagan, his temper was violent, and he appears to have had bad behavior outside the marriage. Consequently Monica’s married life was far from being a happy one. Her mother-in-law was as bad as her husband. Her habits of prayer annoyed him, but it is said that he always held her in a sort of reverence.

Monica had three children: Augustine the eldest, Navigius the second, and a daughter, Perpetua. Monica had been unable to secure baptism for her children, and she experienced much grief when Augustine fell ill. She asked Patritius to allow Augustine to be baptized; Patritius agreed, but on the boy’s recovery withdrew his consent.

Eventually her husband became a Christian but died shortly afterwards. She decided not to remarry.

All Monica’s anxiety now centered in Augustine; he was promiscuous and partied all the time. And, as he himself tells us, he was lazy. Augustine had become a Manichean and when on his return home he shared his views regarding Manichaeism Monica drove him away from her home. However, she is said to have experienced a strange vision that convinced her to reconcile with her son.

It was at this time that she went to see a certain holy bishop, whose name is not given, but who consoled her with the now famous words, “the child of those tears shall never perish.” Monica followed her wayward son to Rome, where he had gone secretly. She met St. Ambrose and through him she ultimately had the joy of seeing Augustine convert to Christianity, after seventeen years of resistance.

In his book Confessions, Augustine wrote of a peculiar practice of his mother in which she “brought to certain oratories, erected in the memory of the saints, offerings of porridge, bread, and wine.” When she moved to Milan, the bishop Ambrose forbade her to use the offering of wine, since “it might be an occasion of gluttony for those who were already given to drink”. So, Augustine wrote of her:

In place of a basket filled with fruits of the earth, she had learned to bring to the oratories of the martyrs a heart full of purer petitions, and to give all that she could to the poor – so that the communion of the Lord’s body might be rightly celebrated in those places where, after the example of his passion, the martyrs had been sacrificed and crowned.

Mother and son spent six months of true peace and then he was baptized in the church of St. John the Baptist at Milan.

At the port of Ostia, Monica fell ill. She knew that her work had been accomplished and that life would soon be over. She had such a joyful disposition that her sons were unaware of the approach of death. As Monica’s strength failed, she said to Augustine: “I do not know what there is left for me to do or why I am still here, all my hopes in this world being now fulfilled. All I wished for was that I might see you a Catholic and a child of Heaven. God granted me even more than this in making you despise earthly felicity and consecrate yourself to His service.”

The finest pages of Augustine’s Confessions were written as the result of the emotion he experienced after his mother’s death.

The “weeping” springs outside Santa Monica, California were named for Saint Monica.