Here we go again with our 7 Quick Takes Friday hosted by Jennifer Fulwiler over at Conversion Diary. We reciprocate links to her blog and then post 7 “quick-takes” on our blogs. Since my sisters, my mother and I made an accidental pilgrimage (read about our trip here) last weekend, I thought I’d look nearby and see what other pilgrimages I could take within driving distance from Atlanta. My 7 Quick Takes are on my findings.

There has never been a better time to make a pilgrimage! During the Year of Faith, October 11, 2012 to November 24, 2013, a plenary indulgence is available to the faithful for making a pilgrimage.

Ave Maria Grotto Cullman, AL
Alabama’s first and only Benedictine Abbey is home to the Ave Maria Grotto. It was built by Benedictine Monk, Brother Joseph Zoettl O.S.B. beginning in 1934 and consists of 3 acres of miniature reproductions of historical building, shrines, and places such as Lourdes and St. Peter’s Basilica. The Benedictine Abbey produces a variety of candles that are available for sale. There is a small entry fee for the grotto, please check the website for details.

Our Lady of the Angels Monestary Hanceville, AL
In 1995 Mother Angelica traveled to Columbia on business for EWTN (Eternal Word Television Network). She visited the Sanctuary of the Divine Infant Jesus to attend mass and she prayed at the small Shrine which housed the miraculous statue of the Child Jesus. As Mother Angelica stood praying at the side of the statue the miraculous image suddenly came alive and turned towards her. “Then the Child Jesus spoke with the voice of a young boy: “Build Me a Temple and I will help those who help you.” Thus began a great adventure that would eventually result in the Shrine of the Most Blessed Sacrament, a Temple dedicated to the Divine Child Jesus, a place of refuge for all”

Shrine of St. John Berchmans Grand Coteau, LA
In 1866, through the intercession of St. John Berchmans, a young novice of the Society of the Sacred Heart, Mary Wilson was miraculously healed. St. John Berchmans appeared to Mary on her deathbed after her prayer for intercession and told her he came by the order of God. The infirmary where the miracle took place was converted to a shrine and is the only place in the United States where the exact spot of a miracle and apparition has been preserved as a shrine. Visit the website to read excerpts of Mary Wilson’s diary where she recorded the details of the apparition and her miraculous healing. 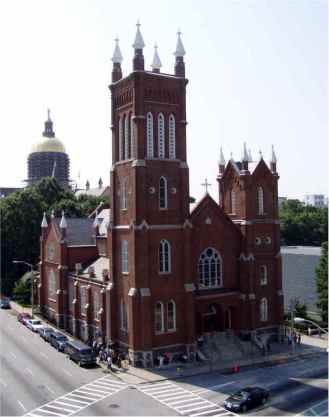 The Shrine of the Immaculate Conception, Atlanta, Georgia
Located also in my hometown, this is where the local archdiocesan Mass for the Unborn is held each year on the anniversary of Roe v Wade.  Atlanta’s most historic church was founded in 1837 and was first called “Terminus” because it was the end of the railroad line. A large number of the railroad workers were Irish Catholics. and a wooden church was built in 1848, the Church of The Immaculate Conception, with Father Thomas O’Reilly as it’s pastor. Father O’Reilly was a Confederate Chaplain and he persuaded General William Tecumseh Sherman to spare his church and that of his neighbors. Legend has it that Father O’Reilly told Sherman, “If you burn the Catholic Church, all Catholic’s in the ranks of the Union Army will mutiny”. The present Shrine was rebuilt after a fire in 1982 and is open for tours.

Monastery of the Holy Spirit, Conyers, Georgia
The Monastery of the Holy Spirit (MOHS) is a Roman Catholic contemplative religious community belonging to the world-wide Order of Cistercians of the Strict Observance (O.C.S.O.) – more commonly known as Trappists. This monastery is the first native-born Trappist foundation in the United States of America and the first daughter-house of Our Lady of Gethsemani Abbey in Kentucky, USA. Founded in 1944, we are currently a community of 36 monks spanning several generations, who live, work and pray at the Abbey.

According to the United States Conference of Catholic Bishops website a plenary indulgence will be granted under the normal circumstances when:

“Each time they visit, in the course of a pilgrimage, a papal basilica, a Christian catacomb, a cathedral church or a holy site designated by the local ordinary for the Year of Faith (for example, minor basilicas and shrines dedicated to the Blessed Virgin Mary, the Holy Apostles or patron saints), and there participate in a sacred celebration, or at least remain for a congruous period of time in prayer and pious meditation, concluding with the recitation of the Our Father, the Profession of Faith in any legitimate form, and invocations to the Blessed Virgin Mary and, depending on the circumstances, to the Holy Apostles and patron saints.”

The other ways to earn a plenary indulgence during the year of faith include: “Each time they attend at least three sermons during the Holy Missions, or at least three lessons on the Acts of the Council or the articles of the Catechism of the Catholic Church, in church or any other suitable location. Each time that, on the days designated by the local ordinary for the Year of Faith, in any sacred place, they participate in a solemn celebration of the Eucharist or the Liturgy of the Hours, adding thereto the Profession of Faith in any legitimate form. On any day they chose, during the Year of Faith, if they make a pious visit to the baptistery, or other place in which they received the Sacrament of Baptism, and there renew their baptismal promises in any legitimate form.”

One thought on “7 Quick Takes: 7 Pilgrimage Sites in the Southeast”